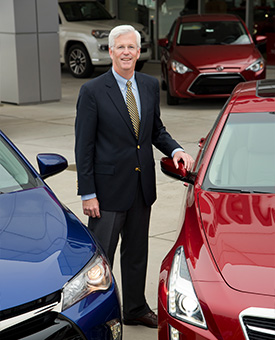 Greg York is President and CEO of Vann York Auto Group, a High Point-based family-owned automotive company that operates five franchise dealerships, a pre-owned store, a collision center, and a finance company. Previously, Mr. York worked as a bond trader with NCNB Bank in Charlotte, North Carolina. In 1987, Mr. York returned to his family’s business and led the Vann York Toyota dealership. He held several leadership positions in the company before being named President of Vann York Auto Group in 2000. Under his leadership the company has acquired three dealerships, built a collision center, and created an auto finance company.

York also served as Chairman of High Point Bank’s Board of Directors until it was acquired in 2016. He now serves on the Executive Committee of the newly formed Triad Business Bank.

A graduate of Duke University and UNC’s Kenan Flager Executive Institute, Greg was named 2015 Time/Ally Dealer of the Year for North Carolina and one of four national finalists. Mr. York is an active leader in his community and in 2019 he was named Business High Point Distinguished Citizen of the Year.